What a stunning Scrap Pack this month!!
It was cram packed with gorgeous Jillibean Soup's Blossom paper range. Soooo pretty!! 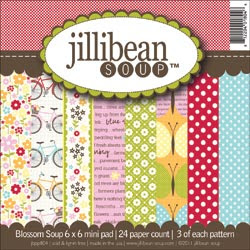 Perfect opportunity to do some more lovely Abbey LOs!! I do love doing girls stuff! 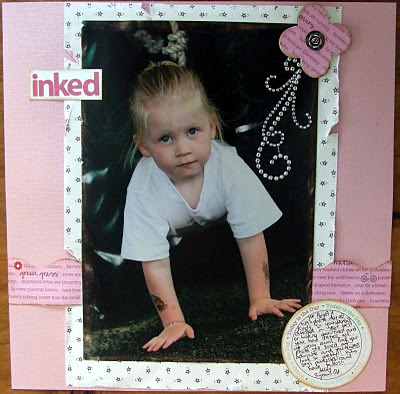 This big photo of Abbey has been hanging around for a while. I have been wanting to scrap it for ages and these papers just worked perfectly with it! This was her first Kindergarten photo, she just got her 2nd one taken today! I can't wait to see how it turns out! I just love how the photographer has gone right away from the traditional sit on a chair pose for the Kindergartners. Abbey told me her photo taken today was a Lion in the Logs! I am very excited to see that one! 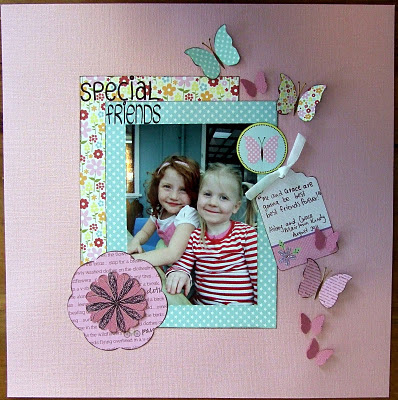 Another Kindergarten pic. This is one of Abbey's best friends at Kindy. I just LOVE this photo of the two of them!! Two gorgeous girls! 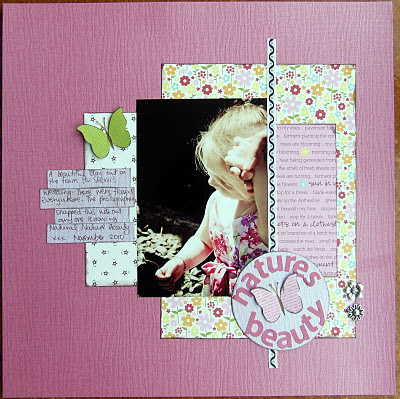 This photo was taken at my beautiful cousin Sherri's wedding. I had no idea that the photographer had the camera pointed at Abbey! But man I am glad she did I LOVE this photo!

As soon as I saw this Jillibean collection I thought about Abbey and what I want to do for her new bedroom. We are still quite a way away from decorating in there but I thought I could start with the little things so I made this lamp shade. 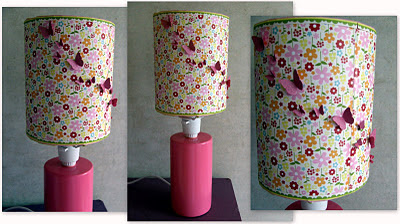 It was just a cheap Bunnings Warehouse lamp with a pale pink shade. I like it much better now!

And don't forget to go in and check out the latest Challenges!
Posted by TracyP at 8:50 PM 5 comments:

You know I always thought that out of my two Kids that Abbey would be the one to have the first major injury. She was the one who was the more adventurous, more brave and well frankly more accident prone, see HERE. So when Riley ended up with stitches in his eye brow I was surprised (see HERE) So again I was surprised when Riley was the first to break a bone.

Mum and I had put the trampoline up a couple of weeks earlier, but we hadn't managed to get the safety net up. The weather had been quite awful so the kids hadn't been on the tramp since we put it up. It was a lovely day and Mum and I were sorting some stuff out inside. Riley and Abbey were jumping on the tramp for the first time. They thought it was fun to be jumping off the tramp into the grapefruit tree. After seeing them both do this Mum and I decided it was time to get the safety net up. Half way through putting up the 3rd pole Riley jumped off and landed on his arm. He caused a fuss about it cried and was holding it gently. I told him to sit quietly while I finished putting up the net. I figured I'd keep an eye on it and see what happened. he was fine sitting for a bit, but when he tried to get up using that arm he shrieked and I knew I would have to take him to the doctor. So off to White Cross (the local A&E) we went. Several hours later we had x-rays confirming that he had fractured his wrist. A plaster cast was put on and home we went. 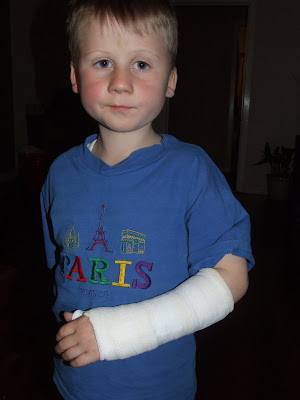 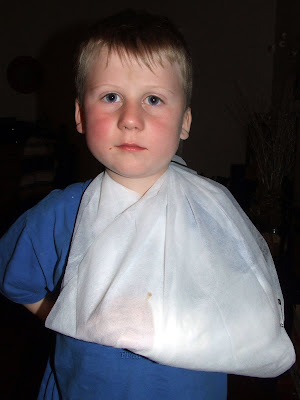 2 weeks later we went back to take the plaster cast off and get his more stable fibre glass one on. Riley chose a pretty blue (only because they didn't have his favourite colour yellow!) 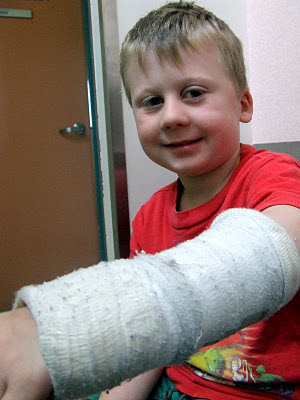 Just before we got the new cast on 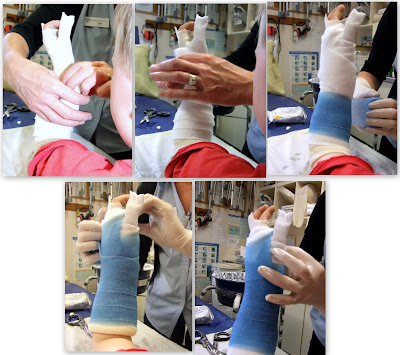 Getting his new cast on

Another 3 weeks after that we went back to the clinic to get it taken off! As soon as Riley saw the saw that gets the cast off he started freaking out. He screamed the roof down and we had to have an extra nurse to help hold him still. But we finally got there and apart from a skinnier, whiter arm from the other one, it's all good!

Now I guess I just hold my breath for the next trip to the A&E!!
Posted by TracyP at 2:07 PM 4 comments:

On the last day of term Abbey's Kindergarten had a Fundraising Art Auction.

Several weeks earlier the teachers sent one blank canvas home with each family. The Adults in the family were to create a piece of art to put in the auction.

Being arty crafty I volunteered to do a few more canvases, and there were a few things I wanted to give a go so two birds with one stone kinda thing!! I also convinced a couple of friends to donate their time and creative flair too! Thanks Becky & Nicola!!

There was some pretty AMAZING Art Work produced by the families! It was awesome!

This is what I made .. All inspired by Pinterest of course! 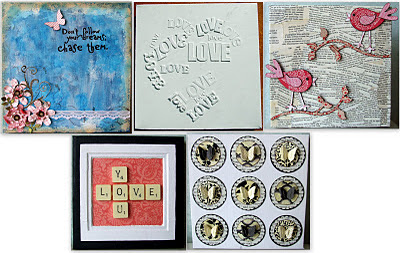 Many of the children also made canvas Art at Kindergarten which weren't up for Auction but were for sale on the night. Of Course Abbey made TWO canvases so I had to buy them both! Lucky they were so awesome!!
Here she is posing with them at the Auction ... 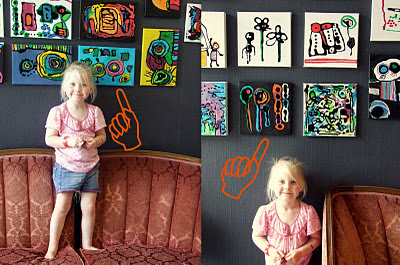 It really was a fantastic night! Every single piece of art was sold and the Kindergarten raised $1600!!! WOW!! That is FANTASTIC! The money raised is going on developing some of the outdoor area which you can read about HERE

Check out the Mairtown Blog for their version of the event HERE
Posted by TracyP at 1:11 PM 5 comments: