Well Birthday .. not so sure about Happy. On days like today it's when you really miss your loved ones and today I was thinking about my dear hubby ALOT. We spent the majority of the day on the phone or online with each other but it just isn't the same .. so when he went off to bed (darn 8 hour time difference) I needed something to distract me from the gloomy feeling. I played cards and coloured with the kids and scrapped. Nothing like a bit of good crafting to get you in a better mood!! If anything came out of the sad day it's how much I appreciate my friends :) I got so many "we love you happy birthday" wishes from them it was hard to be sad for long, thanks guys .. you all know who you are xxxx

and here is the LO I finished today 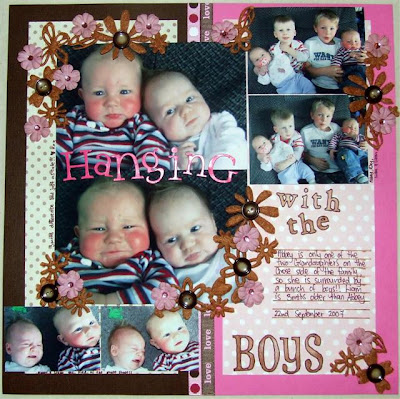 I have kept up my Scrapping since seemingly getting out of my 6 week block .. it's been nice :)
Here are the latest pages ... 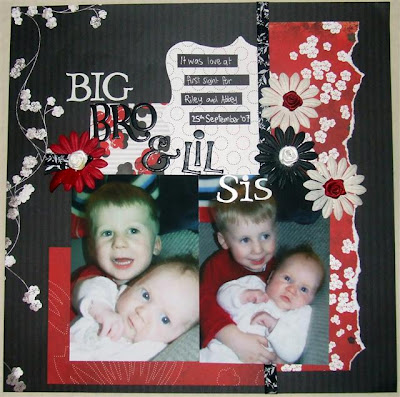 This was done for a chalenge which had to have One Photo (opps cheated there), a decorative edge using cutting, punching or ripping, ribbon or lace and bling (opps I forgot the bling) I'm quite pleased with this one, I used up some of my Kasier Sakura Park Papers which have been screaming to be used :) Sadly I used my last black flower on this LO :( Oh well good excuse for some shopping!!! 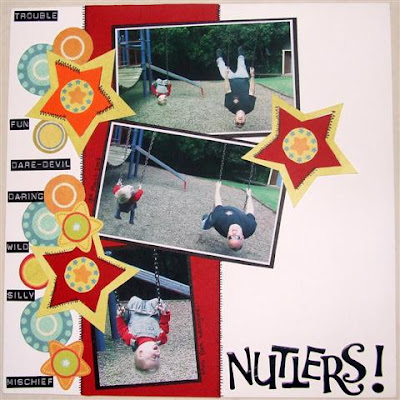 I've had these pics laying around for AGES!! I haven't known what to do with them until I was browsing through some galleries and got an idea from a LO on there. My favourite bit of this LO is the upside down T ... small things amuse small minds hehe. The stars and circles are from MME Just Dreamy, Star Bright paper range. 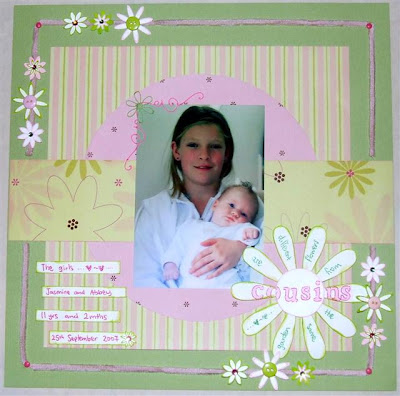 I am now taking a small break from LOs to make some True Blood ATC cards, I have to do 3 different ones, I have finished one set, have an idea for second set but have still got to come up with what set 3 is going to be hmmmmmm best get the thinking cap on!!
Posted by TracyP at 8:13 AM 1 comment:

Tis the case with my Hubby and my Scrapping!!
I haven't crafted in about 5 weeks, sad I know but the mood was all wrong. It has been cold I've been rather sad and I have been reading up a storm. But on Friday I though NO I MUST CRAFT and I did and I have keep crafting since :) So here is what I have done ... 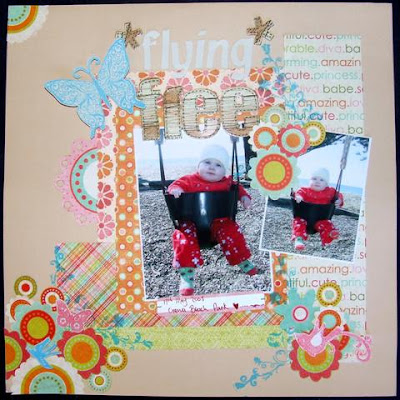 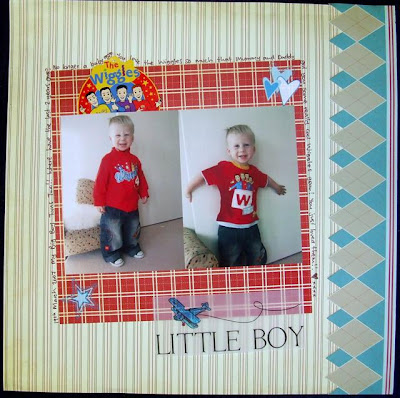 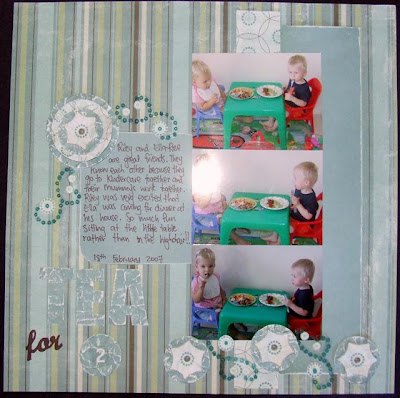 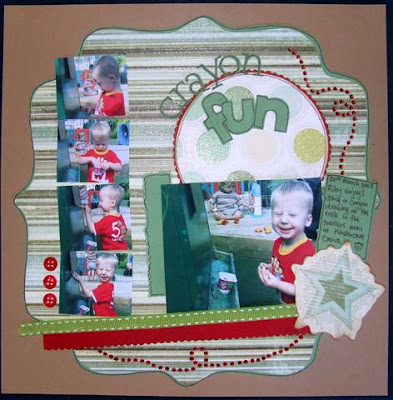 As I went in to pick Riley up after work last night he ran across the classroom tripped and hit his head on the edge of a table, I went over to him and he was crying and when I picked him up there was alot of blood, I took him over to the bench where Nina (his teacher) grabbed some cloths and held it to his head, I couldn't bring myself to look so Nina did and she said she thought he needed to go to Coast Care (the local A&E), I bundled Riley up took Abbey back to the babies room and left her with Lyann (her teacher) then rushed Riley down to coast care with him holding a cloth to his head. We waited for ages to see the doctor and Riley had stopped crying in the car on the way so he was feeling pretty ok. We finally saw the doctor and he had a look (it had stopped bleeding) there was a very deep and wide gash in his left eyebrow. He went off to talk to the nurse and came back in. He said they couldn't glue it because it was too close to his eye and butterfly stitches wouldn't work so the last option was to stitch it. He said I had two options
1) Get it done right then and there with Riley been VERY unhappy until it was done
2) Go to Starship where they would put him to sleep and do it
I really didn't like the idea of him having to be put to sleep and Abbey was still with Lyann and going to Starship meant more waiting around and a longer night so I opted for them to do it there. The nurse wrapped Riley up in a big blanket like we used to wrap Abbey as a baby, pinning his arms (this is where he started crying again) I sat next to him holding his arms and legs down and keeping them still, the nurse held his head. He was so very brave and although he cried he didn't move and was very still like the doctor and nurse asked him to be. They gave him three stitches and a yellow lollipop :) I have been back to the doctor this morning for them to change the dressing and everything looks really good, and the stitches will come out on Monday ... here are the photos I took this morning when the nurse was changing his dressing ... oh my poor baby :( 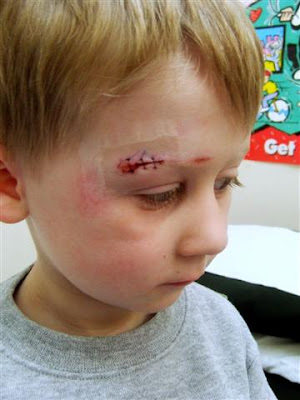 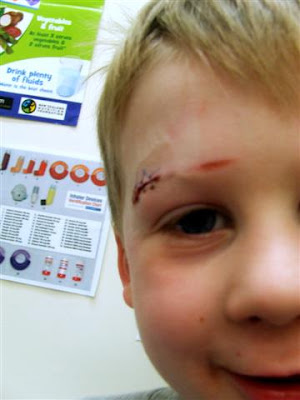 Well off to make the poor boy some lunch and then get going on another LO I ahve almost finished :)
Posted by TracyP at 12:03 PM 1 comment: