Haven't done much Scrapping or blogging but have finally got my scissors and double sided tape out and produced these little numbers!!! 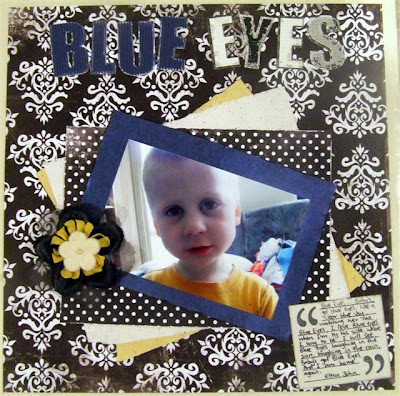 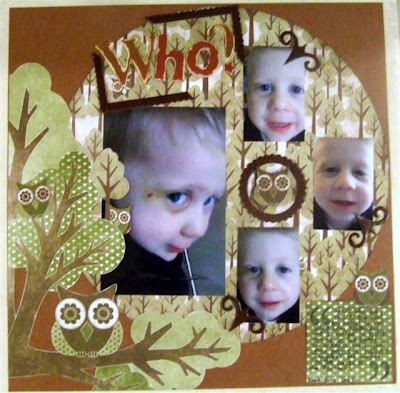 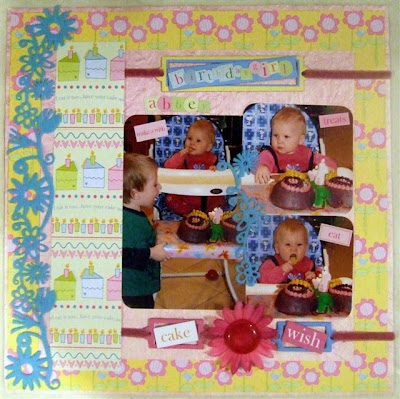 Check out the new idea from Queen&Co Too cute the little buckets of goodies!!!
Posted by TracyP at 6:35 PM 1 comment:

Here is the first of Many Tinkerbell LOs .. Abbey was Tinkerbell at Halloween and I think I went a little overboard with the photos!!! I love them all! so they must be scrapped!!! 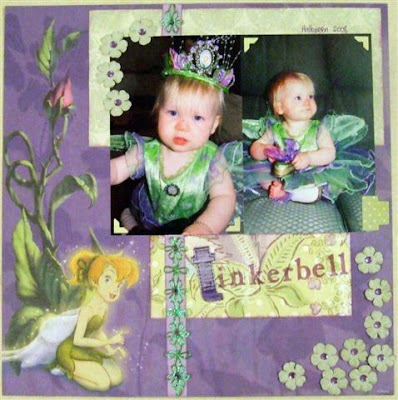 because I'm shocking at following through!! I said I'd complete a LO a day ... well this one has been sitting on my desk for almost a week!! I'm just glad I have now finished it! 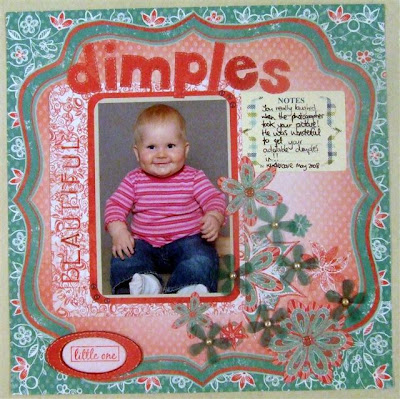 Well done Debbie can you please e-mail me your postage details to ...
twinpalms1@xtra.co.nz

Thanks everyone who entered and thanks for continuing to visit my blog!
Posted by TracyP at 9:16 PM 1 comment:

well I said there was going to be one!! But where is it?
Well it's not uploading for me tonight so I will try again tomorrow!!!

Video Blog of my Scrap Space!

Everyone at Fiskateers is cleaning .. so I have also been inspired to clean ... I am also semi-packing for our move to America!
Anyway I have been going through my stash and have decided to get rid of all the stuff I don't think I'm going to use! Mostly Alpha stickers, quotes and words, stickers and a few other bits and bobs!! Some have been used some haven't!
So Leave me a comment and I'll draw a winner!

Here is a pic .. I have already added more stuff since taking the photo!! 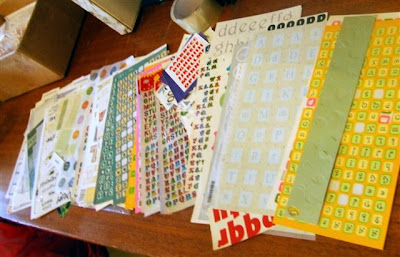 Well I was doing real good!! Unfortunately I think the sleep I have been avioiding to have is catching up on me!! Last night I crashed!! And I had only got my Thursday LO Half done .. tonight, also tired, I managed to finish it! So now I'm a LO behind, but at least I scrapped everyday!! HEHE
Anyway here are the LOs ..... 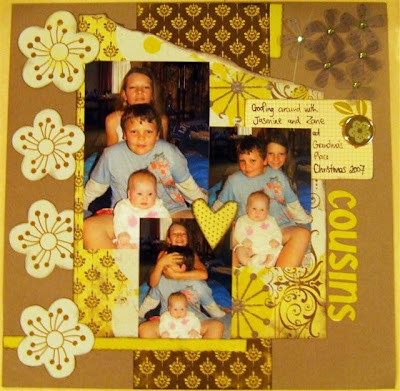 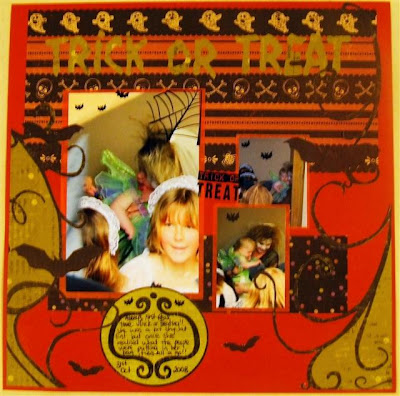 I may not get a LO done tomorrow either as I'm away for the day and night .. but I'm hoping at some stage I can catch up somehow!!!
Posted by TracyP at 10:59 PM 1 comment:

It is only just recently I have discovered the pagemaps site, I do vaugely remember looking ages ago but it never impressed upon me until now. And I LOVE them!! The last 3 days in a row my good friend Jennie and I have been choosing each other sketches to do. These are the LOs I have completed from the sketches Jen chose for me ..... 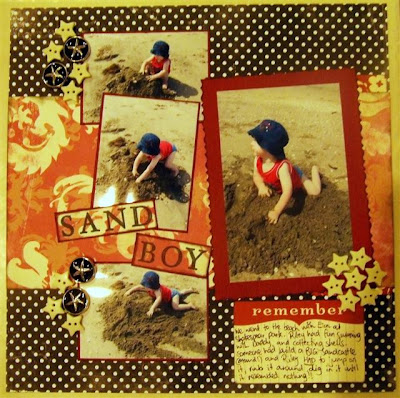 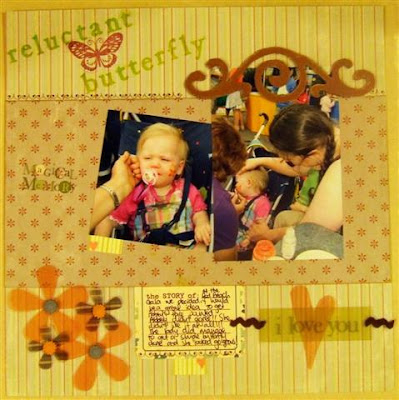 I now have given myself a goal of completing ONE LO a night, I think it is a goal I can achieve and the pagemap sketches are helping me to achieve that goal!! So every night Jennie is choosing me a new sketch!!
Watch this space for many more LOs to come!!
Posted by TracyP at 9:46 PM 1 comment:

Danice is a Bossy Scrapper!!!

Ok so last night I was having trouble been inspired ... Dana got all Bossy Scrapper on me and told me what to do ... It resulted in two pretty ok LOs!! 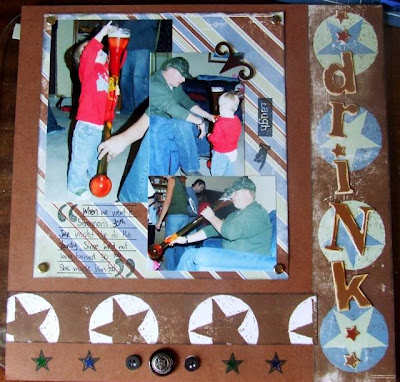 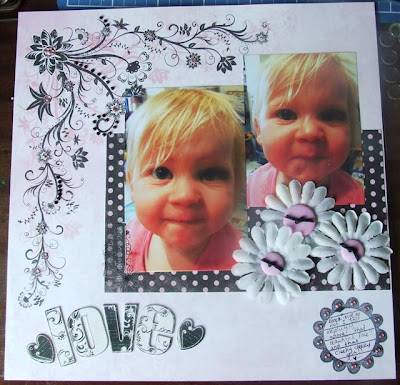 ok so I chickened out on distressing the paper but I have promised Danice I'll do it next LO!!!

I found my bossy scrapper to be great! I think everyone should give it a go!!
Posted by TracyP at 2:36 PM 2 comments:

My daughter seems to be in a constant state of healing! She has had graze after bump after bruise!! It all started HERE ... that was her first major accident since then she has fallen out of the pushchair and got another graze and bruise on her head .. fallen on the Kindercare driveway and grazed her knees and nose .. been bitten on the finger by a rat at the pet store .. 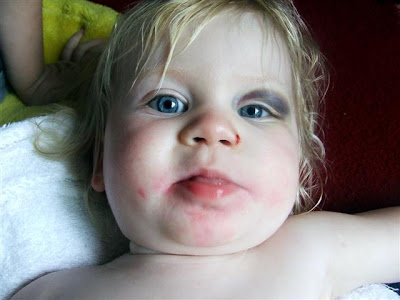 This happened at Kindercare on New Years Eve! She fell off the little slide and grazed up her nose, it wasn't until we got home that the bruise on her eye started to come out and today, two days later, it looks just fantastic!!
I have taken LOTS of photos so expect to see a LO soon, actually don't be suprised to see many accident LO's with this wee Princess lol!!
Posted by TracyP at 5:55 PM 2 comments: 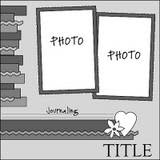 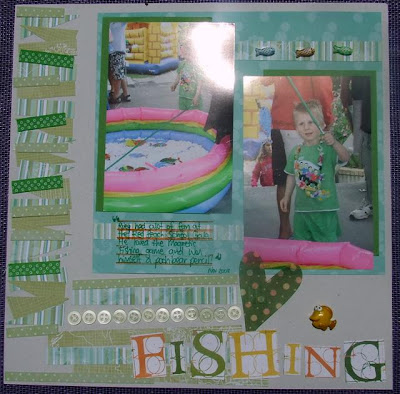 Well what an uneventful New Years for me!! But with two kiddies and no hubby what else did I expect! I see great things happening this year and I can't wait to get stuck into it all!!!

Today I re-affirmed my fear of stamps!! I did this LO and totally mucked up the stamped title so I had to do a fix up job! I have decided my next major scrapping purchase MUST be a Stamp Press so my fear of stamps can be conquered!!
Anyhooo here is the LO 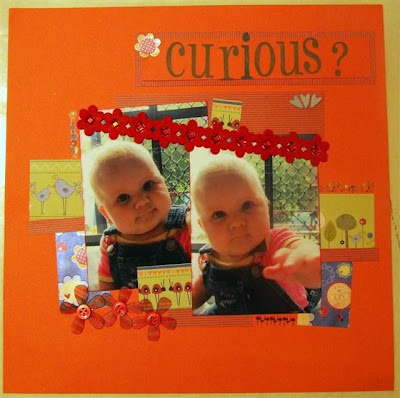