Today at Abbey's Kindergarten they had a 'Cultural' Day. The teachers asked the children to dress up in an outfit that represented their culture as well as to bring in some food that represented their culture too for a shared lunch at Kindergarten. I had a think and asked around and decided that since I thought NZ was going to get quite a bit of representation I would focus on Abbey's American half.

My Mum is the best for sewing up costumes at a moments notice (LOVE my Mum!!) So we found a pattern and some fabric and turned little Miss Abbey into an American Cheerleader!

We watched a few YouTube videos of cheerleading before going to Kindergarten this morning just so Abbey knew what she was supposed to do. We were watching them flip and throw each other up in the air etc and Abbey says, with her eyes as wide as saucers, "I can't do that Mum!"

I made Mini American Hot dogs as our food and we had such a great time at Kindergarten! I totally regret not getting a photo of them because they were a HUGE hit with the kids! I think I will definitely make them again for the next party we have.

Abbey Really enjoyed having me there, showing me all the things she could do around the playground!

The Kindergarten had a raffle for a few Prizes for fundraising and WOW!!! We won the First Prize!! Totally unexpected and awesome surprise!! And what a fantastic prize too!! I can't wait to get the new books into the library at our new place! 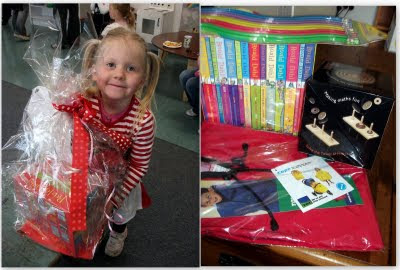 I have said it before, and I'll say it again I absolutely LOVE Abbey's Kindergarten!! Thanks so much to all her teachers for hosting another awesome family event! 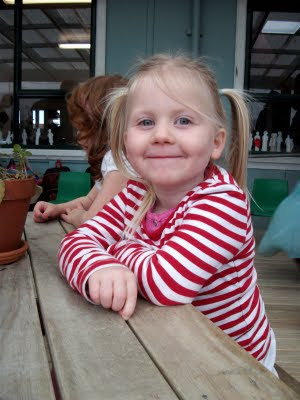 LOOK at your gorgeous girl *hugs n kisses* to her -
*swoon* at the Ronald Dahl books!

Aah she is just beautiful!!

aww she looks AWESOME, good job!!! Abbey is soo soooo beautiful i could looked at pics of her sweet wee face all day, great post girl!

and LOVING the prize I love Ronald Dahl books, dont think I have read one I didnt like, imagine the fun in your house when the kids are old enought to understand/read them

Wow that is such a cool kindy...I love it when you find somewhere your kids love that has a great atmosphere and great teachers - yay for winning such a fab prize too!

The outfit looks so good - she is soooo cute too! Yay for winning the raffle!!

awww she looks ADORABLE!!!!
And yay for winning the prize, what a fantastic one for your new library!!!

aw she looks so cute! and yay for winning an awesome haul!

Great outfit! What did you use for the buns for the mini hotdogs by the way? :)

So lovely to hear the story behind Abbey's costume - and thanks Tracey for supporting us at Kindergarten (and our blog!).

Oh congratulations on your awesome prize! Nice to have a sewing Nana/Grandma too.

wahooooooo on winning the raffle and cute outfit and food item !!!
love it!!!